A poem for Wednesday


Well, amazingly we had beautiful weather during our stay in Keswick, in the English Lake District, it was a wonderful week.  We actually climbed a little mountain, and went to a stone circle that is 1000 years older than Stonehenge.

We have taken lots of pics, and if I receive some comments I will publish them - the more comments, the more pics!

Here is a poem I recently came across in a book called 10 Poems to Change Your Life.  Hope you like this one as much as I do.

One day you finally knew
what you had to do, and began,
though the voices around you
kept shouting
their bad advice--
though the whole house
began to tremble
and you felt the old tug
at your ankles.
"Mend my life!"
each voice cried.
But you didn't stop.
You knew what you had to do,
though the wind pried
with its stiff fingers
at the very foundations,
though their melancholy
was terrible.
It was already late
enough, and a wild night,
and the road full of
fallen branches and stones.
But little by little,
as you left their voices behind,
the stars began to burn
through the sheets of clouds,
and their was a new voice
which you slowly
recognised as your own,
that kept you company
as you strode deeper and deeper
into the world,
determined to do
the only thing you could do --
determined to save
the only life you could save.

Isn't that lovely?  I've posted this for all mothers, grandmothers and stepmothers, for people trying to help others at their own expense, and for a wonderful blogger way up in Scotland, who is not receiving comments right now, so the above is my comment to you in turbulent times. Go well.
Posted by Jayne at 08:45 3 comments:
Email ThisBlogThis!Share to TwitterShare to FacebookShare to Pinterest 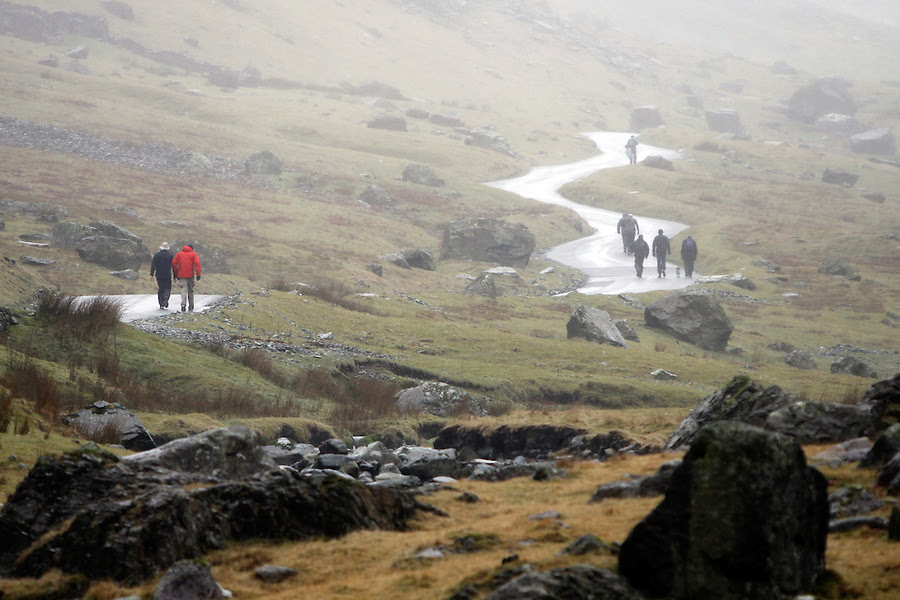 We are planning to go to Keswick in a few days' time, and the weather forecast is not looking at all good at the moment.

Any ideas for rainy day activities will be gratefully received!

Meanwhile I am baking cakes and cooking up some casseroles which I will freeze and take along with us, so we can have something nice and hot when we get there.

I made some lemon drizzle cakes for the holiday yesterday, using a different recipe to my usual one.  They sunk dramatically, but hopefully they will taste just as good as ever!

We had dramatic rain in the Midlands last Thursday, which was so bad that even Tesco's had to close due to flooding.  We thought we had got off lightly, until days later when I went into the garage and saw a big lake in there!  Mr LFH had to bail it all out, the ground has almost dried out now.  A bit of sunshine would be very welcome any time now!

Posted by Jayne at 06:56 3 comments:
Email ThisBlogThis!Share to TwitterShare to FacebookShare to Pinterest 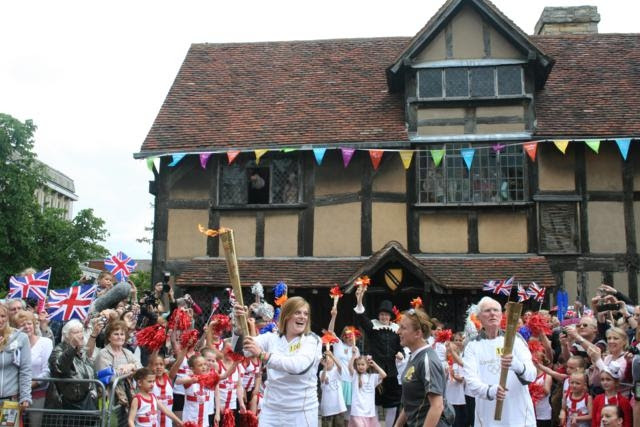 I am not really a sporty person at all, but as the Olympic flame was coming to Stratford upon Avon this afternoon, and as this is one of my favourite places, we thought we would go and cheer it on its way through the Midlands.  It was such a fun day, there was also a River Festival happening, so more pics of that to follow when I have loaded them.  There were lots of canal boats on the Avon, decked out in bunting, and there was a wonderful atmosphere.


We went into the Shakespeare Theatre, and I bought a copy of the script of a play the RSC performed last year called Written on the Heart, written by David Edgar.  It is about the making of the King James Bible.  I look forward to reading this in my own time and savouring the text, as sometimes you miss things during a performance.

Posted by Jayne at 12:34 2 comments:
Email ThisBlogThis!Share to TwitterShare to FacebookShare to Pinterest
Labels: Bible, Days out, reading, Stratford

I'm walking in the air

I have bought some new shoes, and I am so surprised at how comfortable they are.  For a few years I have had metatarsalgia, so walking any distance has been rather painful, as well as having bunions, so imagine how surprised I am to have absolutely pain-free feet for the first time for as long as I can remember.

These are the beauties that feel so wonderful. 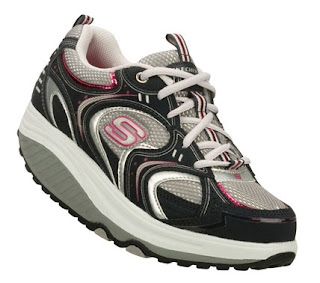 They are Skechers Shape Ups Action packed, and they are amazing!  I have been reading the reviews on Amazon, and apparently they are just the same as MBT's but £100 cheaper.  Actually, these were a bargain.  They are £65 at Amazon, but I bought them from Costco for £23, brilliant.

There seems to be some controversy about whether they actually tone your muscles. Well, they will enable me to walk more, which must surely have health benefits.  I don't believe they will be a short cut to more toning, but then I don't believe in short cuts anyway.

I've worn them for most of today, and my feet feel more comfortable in these shoes than they do in just my socks.  I am so pleased to have accidentally stumbled upon something that has enabled pain free walking, very happy.

Posted by Jayne at 12:42 2 comments:
Email ThisBlogThis!Share to TwitterShare to FacebookShare to Pinterest
Labels: Life

As I said in my last post, the virtual world has had to take a back seat while real life takes over for a while. So what's been happening here?  The biggest excitement has been the arrival of a new grandson! Baby Samuel was born a few weeks ago.  He was quite poorly at first, he caught an infection so was in special care, but he has pulled through and is doing very well indeed!  My son and his partner are coping splendidly with it all. Here is one very proud granny with our little fellow!  He was only a few days old here, and had only just left the special care baby unit.  Isn't he a little darling?

We also had our daughter and granddaughter Poppy to stay.  Poppy is now 9 months old, so very interested in everything.  We took her to a sea-life centre to see all the fish, and to a children's farm to see donkeys, goats, ducks and everything else in between.  Watching Poppy's reactions to everything was priceless. 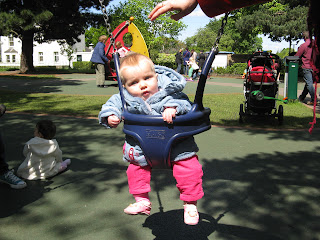 Here she is on the swing, one of her favourite things.  In fact, she likes the swing so much, we bought an indoor swing so she could go on it as much as she liked while she was here!

And finally, we made a trip to York to visit youngest son, so it has been a wonderful time of connecting with all our family. 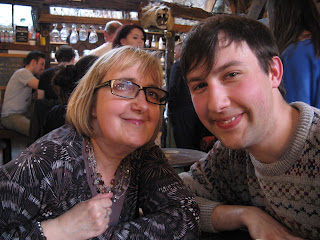 I have just realised I am wearing the same top in both photos, I do have more than one top, just in case you were wondering!

So what next?  Youngest son comes home for the summer in a few days, so I am cleaning up the old homestead and preparing the fatted calf in readiness! All good fun.

We didn't take this one!

I won't be blogging for a couple of days, as Real Life is going to be claiming my time, real people, real places, real conversations, I'll tell you all about it when I get back.  In the meantime, I am leaving you with a picture from the Jubilee weekend that Mr Letters From Home didn't take, as unfortunately we don't own a world war two war plane,or in fact any other kind of plane, now I come to think of it! 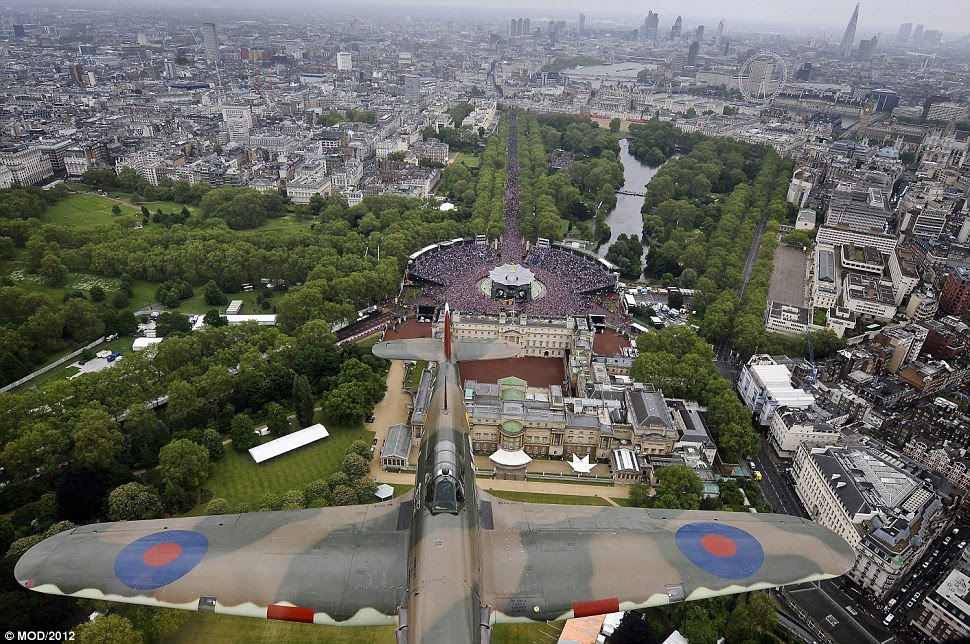 Have a great weekend!
Posted by Jayne at 07:57 5 comments:
Email ThisBlogThis!Share to TwitterShare to FacebookShare to Pinterest
Labels: Days out, Diamond Jubilee, London

Hope you are enjoying the royal pics, we had a great vantage point outside St Paul's Cathedral on Tuesday morning, and all these pics were taken by Mr Letters From Home.

This is royal correspondent Jenni Bond..... 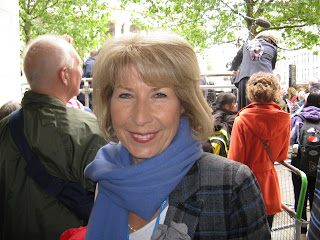 And here I am, with her, just in case you thought I was just getting pics from Google! 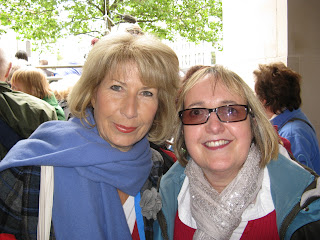 Yes, I was really there, and it was such a fun time, the banter in the crowd was brilliant, we had such a laugh.

Here are the Earl and Countess of Wessex, the Queen's youngest son, arriving at St Pauls, with their daughter. 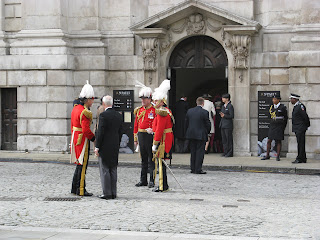 A man should hear a little music, read a little poetry, and see a fine picture every day of his life, in order that worldly cares may not obliterate the sense of the beautiful which God has implanted in the human soul.-Johann Wolfgang von Goethe

Jayne
Hi, I'm Jayne. I love books, bookshops, libraries and reading. This is my online space for sharing bookish thoughts.